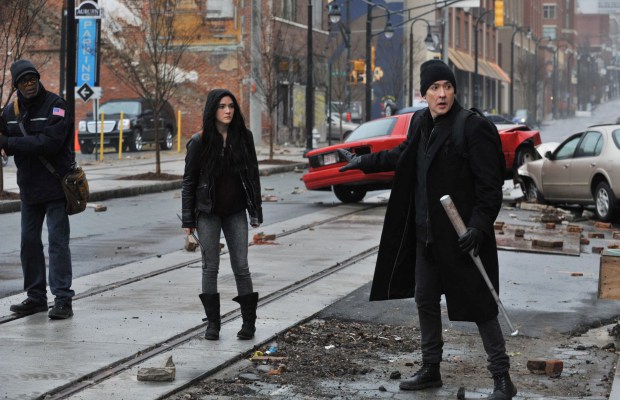 What makes Stephen King novels so enjoyable is that he fills each page with graphic details of gore, blood, and action. Novels need detail and the more detail that engages the sight, touch, smell, hearing, and even taste, the more the imagination takes over and pictures images far more terrifying than they could ever be in real life.

And that’s what makes Stephen King screenplays so predictably bland. Stephen King’s latest screenplay is “Cell,” based on his novel of the same name. Basically the story is about a strange pulse that turns everyone using cell phones into mindless zombies. In the novel, most of the horror takes place in the dreams of the hero as he learns more about the evil driving the mindless zombies. In the movie, Stephen King tries to duplicate the graphic detail of his novel with graphic imagery on film and it never works.

The big problem with horror is that in novels and short stories, you want to overload the reader with details. Yet translating those graphic images on film just means lots of fake blood, special effects, and mindless action.

In “Alien,” the monster is never completely revealed until the end. That means you never can quite tell its shape or appearance. All you know is that it has sharp teeth and it can kill. This unknown factor about the monster makes it far more terrifying than actually seeing the monster. When we finally do see the monster in the end, we’ve already experienced the tension and suspense throughout the movie so the end is just a battle to the death against the hero.

Yet in far too many Stephen King screenplays, everything is exposed and out in the open right away. It’s not really that frightening to see a total stranger get beaten to death, and it certainly isn’t scary to see yet another person get beaten to death five seconds later, and then another and another. In place of tension and suspense, Stephen King screenplays substitute graphic gore and violence, and that’s never scary.

What’s always scary is the fear that the gore and violence will occur and always hoping it won’t be right now. The best horror movies hide more than they show, and that’s what makes them frightening. The best horror novels overwhelm you with graphic details over and over again, and that’s what makes horror novels so frightening.

The movie “Cell” is an example of a lack of clarity in the end. The movie never explains what’s going on. After the hero kills a bunch of zombies, the next morning they see a pile of burned cell phones. The book explains this, but the movie doesn’t, so it’s just one more loose end that makes the movie so unsatisfying.

The movie lacks a compelling villain. He’s some guy in a red hoodie, but he never really threatens the hero except once in a dream, and he never really scares the hero at the end because the hero just hits him with a truck. In place of logic and clear story telling, the movie “Cell” just keeps showing us more people getting killed and more action that’s never explained. The movie is a complete mess and a perfect example how not to write a screenplay.

Screenplays need to be clear and wrap up loose ends. Story telling and plot are far more critical than just showing another person getting their head bashed in. As an exercise, read the novel “Cell” and watch the movie. Then imagine how you would have told the story more effectively. Chances are good you could improve the story by simply cutting out more excessive gore and violence and replacing it with actual plot details.

To read another review of the movie “Cell,” click here.

« Keeping Getting Bigger
Plot and Meaning »