There’s an interesting photographer named Christine McConnell who posts macabre pictures of herself. One particularly interesting picture demonstrates the importance of making an ordinary scene more eye-catching. Nearly everyone has seen the face-hugger alien attacking people. However Christine McConnell adds a special twist by taking a picture of herself as an ordinary housewife with an alien face hugger gripping her head. 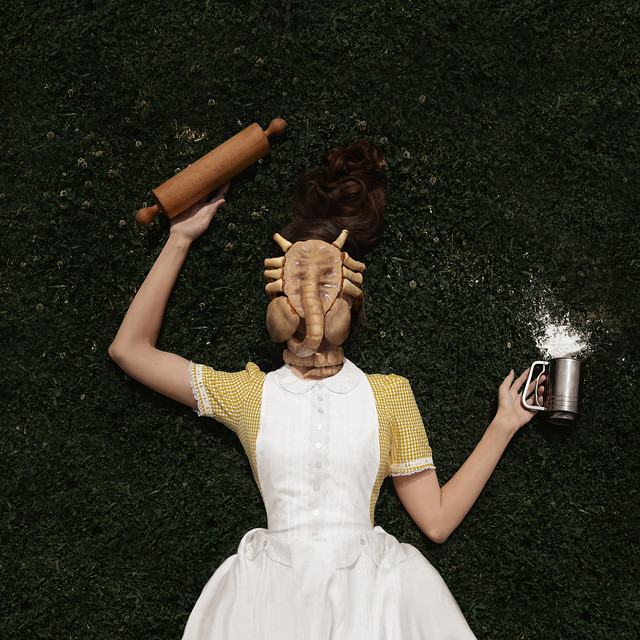 This picture alone shows you the importance of finding unique and unusual ways to show the familiar. Everyone’s seen the alien face hugger before and everyone’s seen a housewife before. But by putting together these two odd ideas, Christine created a far more fascinating image that practically forces your mind to think of how a situation like this could possibly occur.

While Christine works with visual stories through her photography, you need to do the same thing as a storyteller when writing individual scenes of your screenplay. Don’t just have your characters chat as they walk through a park. Have them chat while walking through something unusual like a cemetery, which is what “Harold and Maude” did. Or have them chat while roller skating in an empty skating rink, which is what “Rocky” did.

The more you can make your scenes different, the more they’ll grab your audience. Audiences want to see something new, which means finding unique twists on what could be ordinary scenes. Take an ordinary scene and make it different, such as the opening coffee shop scene in “Pulp Fiction” that turns into a robbery. Or take an extraordinary scene and make it normal so we can relate to the emotional experience such as in “The Shawshank Redemption” when the hero finally crawls his way through a sewer pipe to freedom and stands with his arms triumphantly over his head as the rain washes over him.